How Japan’s food is dependent on invisible “water” imports.

How about the state of water globally?

In Japan, whenever you need water you can just turn on the faucet.
But globally, there is a silently spreading water crisis.

Only 0.01% of the earth’s water is at our immediate disposal.

How much water is there on the earth anyway? According to the Ministry of Land, Infrastructure, Transport and Tourism, 97.5% of the world’s water is contained in oceans and seas, and the remaining 2.5% is fresh water. However, of this fresh water, approximately seven-tenths is in the form of glaciers and icebergs. These sources are not at the ready disposal of humans.

And yet the bulk of the 0.8% of global water supply that humans can use is groundwater. The ten trillion m³ of water contained in rivers, lakes and the like amounts to about 0.01%of the global water total. This is the total amount of water resources that humans can readily use, about three times the 3.5720 trillion m³ of water used globally. While “three times” may sound like a lot, considering the fact that rivers and lakes would dry up if we used the entire amount, it is by no means a lot. This water is part of a cycle where it evaporates, turns into clouds, and falls back to the earth as rain—the total amount of water neither increases or decreases.

This stands in contrast to groundwater. While there is also a cyclical process by which rainwater soaks back into the soil to become groundwater, the replenishment of supplies for most groundwater takes a long time. As humans draw up this water, reserves of groundwater are lost. 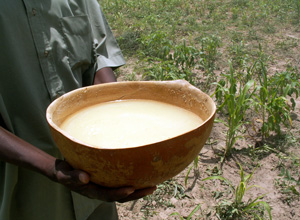 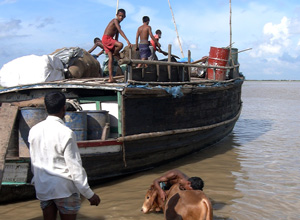 There are many rivers in Bangladesh. Rivers play important roles, not just for domestic use and for agriculture, but also for distribution of commodities

And yet, the amount of water used by humans is increasing quickly. Researchers at the 3rd World Water Forum in 2003 reported that “while in the last 50 years the world’s population doubled, water consumption quadrupled.”

The speed of growth in water consumption, which is twice the rate of population growth, can be attributed to changes in diets. As we have grown more prosperous, there has been a shift towards diets characterized by quality rather than quantity, and we have come to eat a lot of meat, dairy products and oils. Large quantities of grain are consumed in the production of such foodstuffs. As the economies of countries including Japan have grown and diets have undergone rapid shifts, an indirect result has been an increase in the consumption of grains, accompanied by the necessary increase in water used by agriculture. Reflecting continued population increases, the Ministry of Agriculture, Forestry and Fisheries projects that in comparison to 1995 levels, there will be a 26% jump in the annual global water use for agricultural purposes by 2025. If the consumption of meat, dairy products and oils grows faster than expected, this figure will grow even larger.

In many countries there are signs of looming shortages in water resources. Indeed, there are conflicts involving the waters of the Jordan, Nile and Ganges Rivers. The scramble to claim water resources is getting under way, as countries try to secure sufficient quantities of water to furnish the food supplies growing populations and changing diets necessitate.

What is the World Water Forum?

The World Water Forum, held every three years to coincide with World Water Day, March 22nd, is a forum for discussing the grave global issues concerning water. Representatives from governments across the world participate, wielding significant influence over debates about the world’s water problems and associated policy.

Since virtual water is not water that can actually be seen, there is no moment where one can watch water running out of the faucet and think “I shouldn’t waste water.” However, there has been a steady increase in the number of world regions where water is overused. It is said that if regions use more than four-tenths of the supply of surface water and groundwater, the stress on water resources becomes high, risking water shortages. According to predictions by researchers at the 2nd World Water Forum, by 2025 over four billion people will live in countries where the level of stress on water resources is high.
For instance, in northern China and the American Midwest, which provide much of Japan’s agricultural imports, six-tenths of water resources cycling in the environment are being employed, causing significant stress on the system. In the Central Valley of California, drought during recent years has left many farmsteads unable to obtain the necessary water, causing significant unemployment.