“Water” aid progresses but “Toilet” aid is slow off the mark.

Against such a backdrop, the international community has set as one of its targets of Millennium Development Goals (MDGs) “to halve the proportion of people who without sustainable access to safe drinking water and basic sanitation facilities (toilets) by 2015.

If we view these developments in the context of MDG targets, the achievement of the 88 % water proliferation target is right on track while that of the 75 % toilet proliferation target is lagging behind. Furthermore, there are also gaps between different regions; in Sub-Saharan Africa, it is estimated that the water target will be achieved in 2040, while the toilet target will only be achieved in 2076, revealing that further efforts in this area are still required.

According to United Nations Children’s Fund (UNICEF), if 9.5 billion dollars (approximately 950 billion yen) per year could be secured, the toilet target may be achieved. Moreover, the World Health Organization (WHO) reports that investment in lavatory facilities will lead to the improvement of the health of people who live in poor regions, which will in turn deliver economic benefits to the tune of nine times the invested amount (on average). The proliferation of hygienic toilets is definitely not something that is unfeasible from a cost perspective.

In order for the people of the world to be able to access hygienic toilets, their importance must be firmly understood in the minds of both people living in developing countries and those in developed countries. Governments of developing countries should also install toilets when public facilities such as schools are established without fail, and the awareness of the need for toilets must be embedded in the aid provided by developed nations, international organizations and NGOs in the area of water and hygiene, so that it might be more firmly entrenched in the policies of both aid and government. 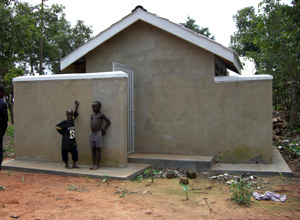 The new toilet constructed by HFW in Kabubbu parish

Ratio of people who have access to hygienic toilets (2006)

Local residents, government and NGOs work together to set up toilets

In 25 villages in five parishes of the Wakiso District, Uganda, HFW is constructing wells and public lavatories in an effort to improve the sanitary environment for local residents.

According to a study that was conducted on the same district, toilets have spread to reach only approximately 30 % of the population (even if unhygienic toilets are also counted), and therefore, areas such as churches and markets where large numbers of people gathered were contaminated with feces. In addition to setting up hygienic male/female segregated toilets at five primary schools in 2002-2005, HFW used funds that were provided under Grant Assistance for Japanese NGO Projects by the Ministry of Foreign Affairs to set up seven public toilets in seven villages in the Kabubbu parish in 2008.

As these toilets met the public lavatory standards set down by the Government of Uganda, they may be maintained with local government assistance. Furthermore, as they have been built to last, HFW has ensured that the toilets may be used for many years to come. We also conducted trainings for the purpose of conveying to local residents the importance of keeping the toilets clean and teaching them management methods. The residents themselves selected managers for the toilets, who will collect usage fees and use these to cover the costs of maintaining the toilets.

In the future, we will increase the number of wells and toilet facilities and also educate children at primary schools about hand-washing and using toilets. By working together with local residents and government, we intend to further improve sanitation in these areas. 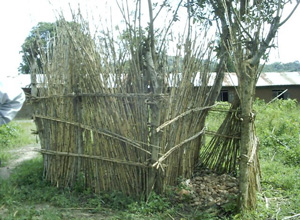 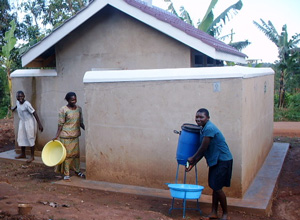 The concrete toilets that were constructed by HFW