How Japan’s food is dependent on invisible “water” imports.
-The world water crisis and hunger-

Currently across the world, there are 1.1 billion people who do not have access to safe water supplies, and efforts are being made to upgrade water systems and create wells, primarily in developing countries. Meanwhile, in Japan, livelihoods are dependent upon the enormous quantities of “water” imported from abroad.

The amount of water we need to consume on a daily basis to stay alive is 2.5 to 3L. If we include the amounts for other everyday life activities such as bathing, clothes washing and bathroom purposes, the total is 314L daily (Ministry of Land, Infrastructure, Transport and Tourism Water Resources Department, 2004).

But this is not all the water we consume. Large quantities of “water” are also necessary to produce the food on which we subsist. The implication is that Japan, which depends on imports for over half of its food supply, is using large quantities of water abroad. 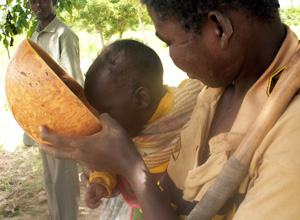 To maintain health, frequent intake of fluid is essential in a dry area like Burkina Faso

We live in an age of copious amounts of trade crossing national borders, and the food and everyday items we consume require the input of a large amount of resources from abroad. Water is just one of those resources. If Japan were producing all the food and industrial products it imports, the amount of water necessary would be great indeed. Professor Anthony Allan of the University of London calls this hypothetical quantity of consumed water “virtual water,” and he has called for the calculation of such estimates.

This statistic is not merely the amount of water used abroad, but an effort to understand how much a country is dependent on the water of other countries, based on a calculation of how much water is ‘saved’ domestically through imports. This concept was developed during the course of research into understanding the lack of water conflict in the Middle East, despite the extreme scarcity of that resource in the region. In order to better share the earth’s limited resources and avoid conflict, the concept is being used in research as a ‘ruler’ to measure current conditions.

Looking at the breakdown of world water usage, we see that 10% is used for everyday activities, 20% is used by industry, and 70% is for agriculture. Virtual water is mostly involved in the production of food. Accordingly, when considering problems of water, we must pay attention to agriculture and food.

For example, to produce a kg of wheat in Japan, 2,000kg (2,000L) of water are needed. The production of meat is particularly water-intensive, with the large quantities of water necessary to make feed for cattle and swine. According to research by Professor OKI Taikan’s research group at the University of Tokyo, it takes 4,500L of water to produce 1kg of chicken and 6,000L for 1kg of pork. Cows are relatively longer-lived and require more feed, so the equivalent figure for beef is 20,000L. To put this in more tangible terms, one gyudon requires 2,000L of water, and a hamburger 1,000L.

If one takes into consideration all this water consumption happening behind the scenes of food production, a Japanese person uses on average 3,000L of water per day. According to the Ministry of Agriculture, Forestry and Fisheries, a total of 3 trillion 572 billion m³ of water were used globally in 1995, or 1,756L per person daily. Obviously, the Japanese figure of 3,000L is high.

The great quantities of water imported as food.

Because Japan’s imports great quantities of food, its quantity of virtual water is also great. The amount of virtual water input via foreign countries for the year 2000 is around 64 billion m³. This is equivalent to three-quarters of the domestic annual water usage, and is greater than a year’s worth of irrigation.

Japan’s food and water imports in graphsWith the change in Japan’s eating habits has come an ever decreasing food self-sufficiency ratio*. Consumption of rice, the staple of the Japanese diet, has fallen by roughly half in 50 years, and bread and noodles have filled that gap. Consumption of meat, dairy products and oils has also increased.

Great quantities of grain and soybeans are needed to raise the livestock used for meat and dairy products and to produce oils. The enormous amount of water Japan is using abroad to support its grain imports is apparent.

NEXT How about the state of water globally? -There is a silently spreading water crisis in the world-