Interconnectedness of life that sustains our planet.

What is the best way to preserve biodiversity?

Biodiversity is an integral part of our life, in particular, of food.
What is the best way to preserve it?

Conference of the parties to the convention on biological diversity in Nagoya in 2010 (COP10).

What do we have to do on a global scale to preserve the biodiversity of our planet? International society has already undertaken many initiatives. The most significant of those is the Biodiversity Treaty, which was adopted at the Earth Summit in 1992. The main objective of this treaty is to preserve the myriad of life forms on Earth along with their natural habitats.

In order to achieve this objective, the treaty nations have set a number of targets; one of which is to “significantly decrease the rate of biodiversity decline by 2010”. Because their target date falls in 2010, the 10th Conference of the Parties to the Convention on Biological Diversity (COP 10) in Nagoya is attracting a lot of attention around the world. Japan will be the host nation of the conference. 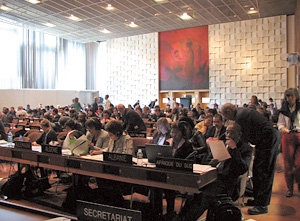 The 8th meeting of the Conference of the Parties to the Convention on Biological Diversity in Brazil
Photo credit: Reprinted with the permission of Associate Professor Kosaka Rei, Nagoya City University Graduate School of Economics, from an article on EIC net

What is the biodiversity treaty?Existing treaties have some shortcomings, such as the Washington Treaty, which overlooks the conservation of certain specific regions and species. For this reason, the Biodiversity Treaty was first proposed as a new framework of action to conserve biodiversity to cover the inadequacy of current treaties. It was adopted at the UN Conference on Environment and Development (Earth Summit) in 1992. As of October 2009, 192 countries and regions have concluded* the treaty. Japan has concluded it in May 1993.

*Signing by a representative of an international treaty becomes legally binding (concluded) by a formal adoption at the national level.

What can we do?

What can we do as individuals to conserve biodiversity? The concept of biodiversity is not very familiar to many people, so the first thing to do is to become interested in it. Then, you spread the message that everyone should be concerned about biodiversity.

You can also take part in many activities sponsored by the Ministry of Environment in preparation of COP10. For example, there is an activity called “Ikimono Mikke!” (or “How do they live?”), where you observe the life style of some interesting creature around you, document it, and post it on the website. It is an attempt to get people more interested in the wide variety of living things in Japan, and to share their findings and new knowledge with each other.

There are also activities related to your daily meals. Japan ranks third in the world in the amount of coffee imported. Most coffee is grown in areas rich with biodiversity, such as tropical rain forests. Coffee grows well in the shade, and can also co-exist with other plants. It helps to conserve biodiversity if it is grown in existing forests, rather than to clear-cut forests to create large plantations. Recently, it has become much easier to find coffee with the “Rainforest Alliance” label that certifies it to be biodiversity-friendly. You can contribute to conservation of biodiversity by consciously buying merchandise of this kind. Locally grown traditional produce is always recommended.

If you consciously make an effort in your daily life, even at your meal table, to sharpen your awareness of the relationship between biodiversity and humans, it will lead to a deeper understanding and appreciation of what it means for us to coexist with other life forms.

Ref: Environment and the Sound Material-Cycle Society in Japan, 2008, annual report,FOOD AND AGRICULTURE ORGANIZATION OF THE UNITED NATIONS (FAOSTAT), database. Interconnection of Life: Understanding Biodiversity (by Kôsaka Ryô, Pub. Chûnichi Shinbun), Biodiversity Centre, website,Conference of the Parties to the Convention on Biological Diversity in Nagoya in 2010 (COP10), website