Interconnectedness of life that sustains our planet. -Biodiversity and food-

Life on this planet is endlessly interconnected. Now the balance of those interconnections is on the verge of collapse.

On this planet Earth, there exist 1.75 million scientifically identified living forms. If you include yet-to-be identified organisms, 30 million different forms of life are believed to exist (Annual Report, Environment and the Sound Material-Cycle Society in Japan, 2008). These figures include fungi and microorganisms, as well as animals and plants. Their lives and existence are interconnected with and dependant on each other. Human beings are part of this interconnection. However, this precarious balance of interconnection is falling apart, and the number of life forms going extinct is increasing at an alarming rate.

In light of this dire situation, the United Nations declared the year 2010 the International Year of Biological Diversity. It is an attempt to reexamine the current state of coexistence of human beings and other living things on Earth. There are many people who are not yet familiar with the expression “biological diversity” or “biodiversity”?

The Ministry of Environment defines biodiversity as “character and interconnection.” Let us look deeper into its true meaning.

However, these differences of characteristics are not everything biodiversity represents. The fact of the matter is that every life form is able to survive only in the context of its interconnection with other life forms, a web in which every life form plays a role. For example, there used to be a flightless bird called the dodo on Mauritius Island in the Indian Ocean. When human beings began to settle on the island, they overhunted the dodo for food, and the bird, unaccustomed to any predators and unable to fly away for safety, became extinct in no time at all. Then something abnormal happened to the vegetation of the island. The tambalacoque tree, which had its seeds germinated by being passed through the digestive tracts of the dodo, went almost extinct. Some insects and microorganisms that lived only in this tree followed its fate. This example clearly demonstrates that the survival of one species is connected to survival of another.

So, biodiversity means that a myriad of life forms, each with individual and unique characteristics, exist and share this planet, and the survival of all these living things are interconnected with each other. 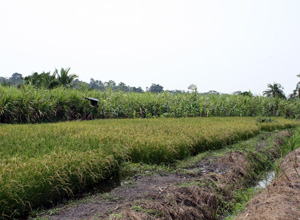 A mustard field in flower. Mustard produces seeds by the pollination of honey bees.Humans have worked the earth by making use of the ecosystem 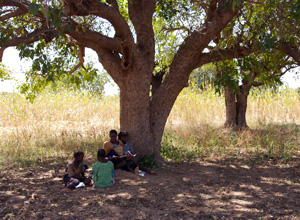 Children in Burkina Faso studying under the cool shade of a tree. People receive the blessings of nature in various ways

One species goes extinct every 15 minutes…..

In recent years, however, biodiversity has been seriously threatened by global warming and human activities such as overhunting of animals, over harvesting of plants, excessive deforestation and landfill operations. The ministry of environment reports that the rate of extinction of species on earth in last few centuries is as much as one thousand times that of the entire past preceding that, and as many as 40 thousand species are going extinct every year.

Let us consider what kind of roles biodiversity plays in our daily lives. It will be easier to understand if we look at its benefits to human society. Sometimes they are called ecosystem benefits, and there are four of them.

The first is “support”. Microorganisms cleanse the water, plants produce oxygen through photosynthesis, and so on; different living things play their own parts in creating and maintaining the ecosystem that can support all life on Earth including human beings. Next is “mitigation”. Biodiversity has the ability to mitigate abrupt changes. It lessens the effects of a sudden surge of insect pests or other natural disasters caused by environmental pollution due to chemical substances or by climate change. For instance, mangrove and coral reefs reduce the severity of a tsunami. Next is “supply”. Living things around us provide food, clothing, and housing. Microorganisms provide materials for medicine. Finally, there is “culture”. It refers to the fact that biodiversity enriches our cultural and spiritual lives. The variety and uniqueness of each locale’s natural beauty contributes to the development of local festivals, literature, music, and tourism. 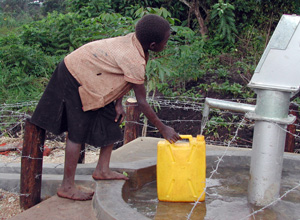 NEXT Interconnectedness of all life forms, human life, and food.