Interconnectedness of life that sustains our planet.

Global crisis of biodiversity how does this crisis affect our lives?

Humans have always enjoyed the benefits of the ecosystem in every aspect of our life. Since time immemorial, we have made good use of the unique ecosystem of the region we live in. The human activity with the largest scale of all is agriculture; it produces food and therefore supports our day-to-day lives. According to a report by the Food and Agriculture Organization of the United Nations, about 10% of all land area on the planet is used as agricultural land. In view of the ever-increasing world population, expansion of agricultural land is expected.

Agriculture used to support biodiversity. However, it appears to be becoming a damaging factor. Or is it?

In Japan, as recently as 30 years ago, specialty crops unique to each region were highly prized, and the seeds of those crops were preserved and replanted. For example, traditional varieties of carrots grown in Hokkaido are generally resistant to cold climates, while the ones in Okinawa are resistant to hot climates. This is because farmers have cross-pollinated varieties suitable to the soil and climate situations of each region in order to develop the strongest and most productive plants. It took a long time for farmers to establish good productive rice paddies, vegetable gardens and fruit orchards. In each of those places, a unique ecosystem has been formed by animals and plants. For example, a holding pond on a farm is a treasure house of small organisms like minnows and frogs, and each pond holds a different kind of minnow.

In recent years, however, traditional farming, which is well-rooted in the local ecosystem, has been starting to disappear. In an effort to raise commercial value and speed up sales of crops, farmers are encouraged to produce the crops that look nice – produce of uniform shape and size. Bruised or wormy produce is often considered inferior and worthless. This shift in consumer taste and industrialization of agriculture has had a devastating effect on traditional farming and the variety of produce. On one hand, pesticides and chemical fertilizers have enabled farmers to raise the same kind of crops anywhere and everywhere. On the other hand, the resulting pollution of soil and water by those pesticides and fertilizers have contributed to the decline of microorganisms and made agricultural activities less compatible with the ecosystem.

A rapid decline in number of crop varieties is occurring not only in Japan but around the world due to globalization. The present global economic system does not allow local producers to produce what is needed to feed local people; instead it demands they produce what the world market wants.

It is estimated that more than seven thousand varieties of crops have been grown in the world since the beginning of agriculture, and at least 80 thousand kinds of plants on Earth are edible. It is further estimated that 90% of crop varieties grown within past 100 years have disappeared because of the push for mass production. Currently, about one half of the total calorie intake of the world population’s plant consumption is said to come from just three crops: wheat, rice and corn. When you add potato and barley to this, only five types of crops supply 80% of the world’s total calorie intake.

Some say that it is quite alright to have a limited number of different crops, as long as we can grow enough food to feed the world population. But in reality, it isn’t that simple; there is a distinct possibility that a drought over a wide area caused by climate change might bring a massive crop failure and famine. The loss of different varieties, each with inherent resistance to different challenges such as cold or hot climate, arid soil, or variety of diseases, is the loss of food security. The decline in the number of crop varieties also means a decline in the variety of life in the ecosystem that each variant supported.

The chain reaction could spread much further than we could ever imagine. Sooner or later, it inevitably affects human life. 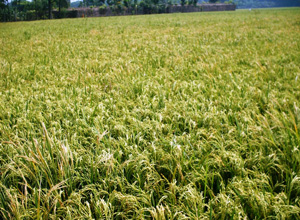 Humans consume about a half of necessary calorie from wheat, rice, and corn

How should we protect local species?

The former method requires conscious efforts and changes in attitudes on the part of farmers. Some farmers might mistakenly believe that a modern variety is superior to a traditional variety, when in fact they are quite comparable in nutritional value and growth rate. Even when farmers change their thinking and start growing a local traditional variety, they may face many hardships before they can reach a sufficient income level with it; a lack of market, or disadvantages due to non-conformity to the government policy. For that reason, it is just as important for the consumers to recognize the value of traditional varieties.

As an old Japanese saying goes, “Shindo Funi”; that is, our physical well-being and the environment are inseparable. This axiom encourages us to live on a diet of local produce that is suited to the unique local conditions. We must seriously consider this way of thinking and bring back traditional ingredients and cooking methods. A shift in thinking at the government level must also take place; the focus on growing a limited number of crops in uniform shapes to trade and market them all over the world must give way to more emphasis on locally produced crops.

In Africa and Northern Europe, experiments have been undertaken to preserve and utilize the genes of rare or at-risk species for research or commercial purposes. The true conservation of biodiversity, however, is not accomplished by preserving and protecting only certain at-risk or endangered species in artificial environment. Biodiversity must be carefully guarded everywhere on the planet, rather than trying to preserve it in a closed space of laboratories.

Bangladesh has been undertaking a country-wide effort to modernize agricultural production since the 1960s. But the chemical fertilizers and pesticides of modern farming proved to be incompatible with traditional local crops. As a result, many farmers abandoned the traditional varieties. When HFW began its operation in Bangladesh, a large number of local farmers did not take traditional varieties seriously. They had forgotten the fact that the traditional crop varieties that they had inherited from their ancestors were exactly the varieties that were best suited to the unique local climate and soil conditions, resistant to disease, and grew best without much fertilizer or pesticide.

HFW suggested to local farmers that they preserve the seeds of traditional varieties in a communal storage hut specially built for this purpose. Nowadays, farmers freely exchange traditional seeds of varieties grown on their family farms. 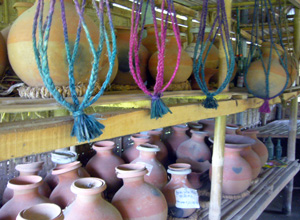 Preserving the seeds in earthenware

NEXT What is the best way to preserve biodiversity?