A new school year started. Young children on their way to kindergarten or childcare clasp the hand of their mother or father. It’s a familiar sight in Japan. However, more than 60% of the world’s children cannot receive education or go to childcare prior to their schooling.

When we hear the words “Early Childhood Education,” the images that spring to mind are of education that prepares children for elementary school or day-care center where dual-income families put their children in. What does pre-school education and childcare mean to children? Let’s take a look at examples from Japan and countries around the world. 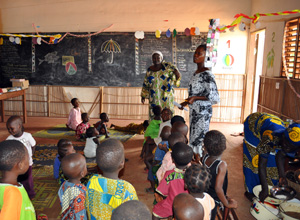 In Japan, kindergartens and childcare centers are facilities that provide care and education to children before they enter primary school. The first kindergarten in Japan was a preschool that was attached to the Tokyo Women’s Teachers College (the present-day Ochanomizu Universityn), a school that was established in 1886. The main purpose of establishing this kindergarten was to provide preliminary education to children before they entered elementary school. Kindergartens that were modeled on this facility sprung up rapidly around the country, mainly in urban, well-to-do areas. On the other hand, in Japan, childcare started to be as centers for minding children whose families were poor around 1900. These facilities were established as part of a government welfare initiative.

In Japan, childcare centers played a particularly important role after the World War II, when they served as places for caring for children who had lost parents in the war. Meals were provided so that children who didn’t have enough to eat could obtain necessary nutrition and this supported the development of those children.

Later, Japanese society continued to change greatly through its post-war recovery and era of high growth, and it is still changing today. Nuclear families have spread with the growing participation of women in society and the expanding number of households where both spouses work. Hand-in-hand with these changes, kindergartens and childcare centers are now expected to play the role of a place that provides supplementary child-rearing in place of the home and the local community. In the 1980s, the percentage of five-year-old children in Japan who received early childhood education at kindergartens or childcare centers had grown to 90%.

Today, Japanese society is, on the whole, economically prosperous and, as it rapidly changes, even kindergartens have come to provide child-minding services. There are now few differences between childcare centers and kindergartens. For this reason, kindergartens have needed to become early childhood education facilities where the educational and welfare needs of children are met under one roof.

Even the present-day Fundamental Law of Education sings the praises of early childhood education, stating that “Early childhood education is an opportunity for cultivating the foundation of a lifetime of character development.” This statement and others like it indicate that the impact of such facilities goes beyond education that prepares children for entering primary schools and care centers and for this reason, such facilities have been reevaluated as a place where children’s character formation occurs. As a result, the various facilities are enhancing their curriculums in order to make them more diverse.

The few years in early childhood impact that person past the age of 40.

As the Japanese case study shows, the role of early childhood education is multifaceted. However, throughout the world, there is little research or achievement data related to its effects, and therefore, its impact and actual circumstances are not well understood.

It doesn’t reach the children who need it.

In 2000, 181 countries participated in the World Education Forum that was jointly hosted by UNESCO and UNICEF, “The Dakar Framework for Action” was adopted. Within this framework, which promised to deliver educational opportunities for the world’s children, some of the items that were raised included commitment to attain a goal of “expanding and improving comprehensive early childhood care and education, especially for the most vulnerable an disadvantaged children,” indicating that the focus remains on supporting early childhood education in developing countries.

However, it is a fact that the governments of developing countries, which have insufficient financial resources, often prioritize elementary and middle-school education. Furthermore, in terms of aid organizations, UNESCO, UNICEF, the World Bank and some NGOs are currently implementing only very small-scale projects in this area. For this reason, direct aid from a developed country to a developing country is yielding only very minor achievements.

NEXT The potential of early childhood education in developing countries 1.