Nutrition, protecting the lives and the future of children.

Conditions and causes of malnutrition.

Malnutrition causes many diverse problems. According to UNICEF, approximately 200 million children in developing countries do not receive enough nutrition in the all important first two years of their life, causing health problems like physical and mental retardation. It is also believed that many children who lost their lives due to diseases like pneumonia and diarrhea could have been saved had they been properly nourished.

For present and future lives…

Even if children managed to survive malnutrition, it is often the case they can never recover from the physical and mental retardation they experienced. It’s believed that for every 10kg an adolescent is underweight, in adulthood their labor productivity falls by 10% compared to a healthily grown person.

Malnutrition does not only affect the body, it can also cause mental damage which retards intellectual development. Compared to healthy children, children who lack iron and iodine have trouble concentrating at school and often suffer mental retardation. It is almost impossible for children to recover from the early damage to their intelligence quotient and learning capacity so they lose the benefits they should be able to receive from a school education. This is how physical and mental retardation caused by malnutrition affects the entire life of a child. 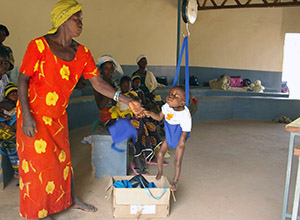 Malnutrition during childhood may cause mental disability or learning disorder

It’s not a case of food shortage.

Malnutrition has a severe effect on lives and futures. What can be done to prevent it? What is the fundamental cause? There’s a tendency to assume malnutrition occurs because of food shortages caused by economic poverty, or famine brought on by drought in regions that made people unable to produce food. This is not always the case.

One of HFW’s action sites, Benin, for example, is blessed with good weather and ample rainfall. It’s an agricultural region where sufficient crops can be cultivated as long as the rain falls when it is necessary. Despite this, there are many malnourished children. In 2007, a survey on nutrition found that many children ate from the same plate as their mothers. Eating the same meals as adults does not provide the necessary nutrition for growth in terms of frequency and content because infants need to eat five to six times a day. Children are not being given enough food because parents do not have sufficient knowledge regarding nutrition.

On top of this, three in five mothers were only eating one meal a day. In Beninese culture, the men traditionally eat first. Food wasn’t reaching those who needed nourishment the most, the women and children. 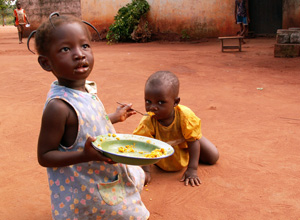 People in rural area of Benin, both adults, children, and infants share their meal from the same plate

Children are linked to their mothers.

This practice of women and children being fed last is not unique to Benin. It exists in many developing countries. According to an investigation conducted by the International Food Policy Research Institute in Central America, Caribbean countries, South Asia, Sub-Sahara Africa, the nutritional state of women and children is poor in regions where the social status of women is low.

Even if they do not share meals, the nutritional state of a pregnant mother has the greatest influence on the health of a newborn child. In South Asia, where 40% to 60% women are underweight, 45% of children born in 2005 were also underweight (The State of the World’s Children 2007). Malnourished mothers give birth to malnourished children who cannot regain their strength as they enter adulthood, in turn giving birth to more malnourished children. Priority must be given to improving the nutrition of children and expectant and nursing mothers to break this negative cycle. 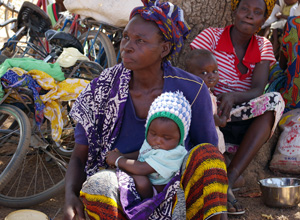 NEXT What can be done to protect children?