The food-processing project in Gbeto village is in its the third year. They are ready to produce products. 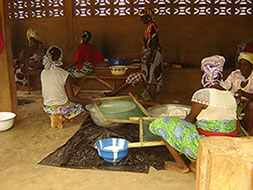 Cassava processing by women's cooperative. Participants plan to reinforce management of the group and to start a new line of product.

HFW Benin office has been training a women's cooperative on food processing for cassava since 2004. Cassava is a root vegetable and one of staple food in Benin. With training for the members and introduction of machines, it has been trying to make the production line more effective and to improve the quality of final products.

In 2007, the third year of project, Benin affiliate office focused on increasing number of processed food items and reinforcing the base of operation for the women's cooperative society producing the goods.

The society has conducted its first election to renew its executive committee members including the president. The committee split the 30 members into two groups so that they can work in a shift for the production. They also require members to join literacy classes and become literate. These moves came from raised awareness for making organization sustainable.

We also had training for making cassava flour in addition to processing gari and tapioca. Benin relies on imported wheat flour like Japan and flour made from potato tubers are used as a cheap substitute for baking bread, cakes and cookies. They are ready to produce these products from cassava flour in the future.