Implementation of training in tapioca production and sanitation. For women’s receiving income. 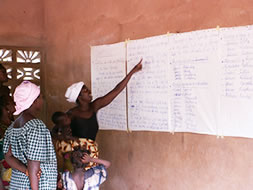 Now the women from community groups can read the training memo

Sanitation management included measures like the thorough washing of hands and feet, the peeling of cassava roots on a sheet to avoid mixing them with dirt, and the wearing of masks during gari drying. At first they were resistant to wearing the unfamiliar masks, but soon got used to them and began to remind each other to keep them on. They also received careful instruction on each step in the tapioca production process.

The details of this production process was also printed on a large sheet of paper and posted on the wall of the production area. At the end of training, each of the women copied the information into her notes. In this way they were able to review what they had learned. It was a moment that the success of another project carried out in Gbeto:  literacy training.

Further trainings in the preparation of food products are planned, including cookie making and the use of discarded cassava peel as mushroom beds. 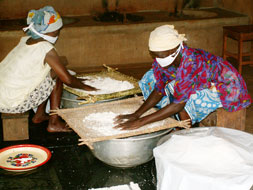