We make inhabitants of 4 villages discuss about the right for food. It was the big first step for them. 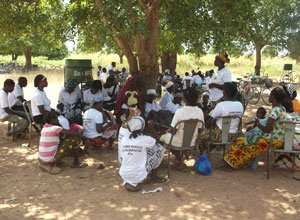 Discussion of the group from Gomtoaga village

We organized an event in the primary school of Pissi Village targeting 227 persons of the 4 villages of the region where we are active to discuss about the right for food. They were separated by village and discussed about various examples infringing the right for food and about measures to tackle those violations. Other subjects such as the income improvement, the compatibility of crops, or the safety of environment and the land, were also discussed, and they made various proposals such as actively appeal to the administration. It was the first time that people were gathering to talk about those themes and they were able to think for themselves. It was the first step to make them start initiative to solve proactively the various issues discussed.