The small business of women who got her start by microcredit is bringing in good income.

When they repay the loans, each group report the result of their project

In April 2008, HFW embarked upon microcredit (small-scale loans) aimed at women's cooperative in Wedbira village where we are active. The members of the organization were divided into five groups. HFW loaned each group 250,000 CFA (approximately ¥53,000) and, small businesses are currently being carried out. In October 2008, six months after the project began, the first repayments and activity report from each group were conducted. The group that generated the most income was one that sold onions. In half a year, the revenue raised by this group came to approximately twice the principle. Another group that manufacturered and sold Sumbala spice after fermenting Nere fruit generated revenue equivalent to approximately one-quarter of the principle. Despite the disparities in the revenue raised by the various groups, distribution of profits and repayment of the borrowed funds was conducted by the cooperative assocation as a whole. Things are being handled in this manner in order to make provisions for a slump in crop market prices or business failures.

Over the last six months, the net profit generated by the cooperative members was approximately 12,000 CFC (approximately ¥2,500) per person. The women reported lifestyle changes such as "I was able to buy medicine for my child" and "I was able to buy kerosine and light a night lantern." In January and April 2009, the scheduled repayments were made in a timely manner and all of the principles and interest were repaid in full. In the future, all net income raised will become the women's income, and so we anticipate further improvements in their living situations, as well as lending the repaid principles and interest to new businesses as starting capital. 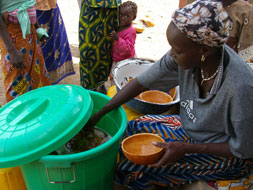 Selling local liquor at the market

When the first repayments were made, the achievements of each group were also reported