A store opened with the proceeds of the threshing and flour-milling machine. Support to a cooperative. 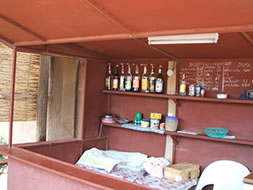 The store in preparation for its grand opening

In August, 2006, with the help of HFW a threshing and flour-milling machine was installed in Wamtenga village. The principle goals of the installation of the machine were reduction of the labor necessary to grind Burkino Faso's staple grain, as well as the capturing of income from the machine's use, which went to support the cooperative running the machine.

Current users of the machine are not just from Wamttnga, but also from as far as villages 4km away. During busy periods, the machine operates from sun up to sundown, and a week's proceeds can reach ¥20,000. Revenues are managed by co-op members using accounting methods HFW taught at the beginning of the project, and are spent in part on gasoline purchases and repair fees. Remaining funds have been accumulating in savings, totaling over ¥100,000 in about one year.

In December 2007, the cooperative used these savings to open a small store. While HFW put up a portion of the construction costs, the cooperative's savings was used as capital, and the store's stock was purchased. Up until now, in order to buy necessities for daily life such as soap and spices one had to bike an hour to make purchases at the market held every five days. Now the purchases can be made in the village.

Eventually, the Wamtenga cooperative plans on taking the further proceeds from the threshing and flour-milling machine and the store to start a microcredit venture.