The local residents using the skills they have learned for reducing heavy everyday work. 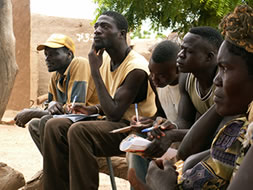 Threshing mills were set up in August of 2006 to make it easier to thresh grain and mill it into flour. Roughly 100 people, including the district governor gathered in the village for the inauguration of the mill.

In Burkina Faso, where millet and corn are staples of the diet, the heavy labor of threshing and milling the grain falls to the women. Until now the women in Wamtenga village have had to either use a mortar and stone to do this work or walk 6km to the nearest village with a grain mill. With the arrival of the mill in the village, this arduous task has become easier.

In order to properly run and maintain the machine, a management committee was established from among the members of an existing village association. This committee, comprised of three men and five women, manage the mill and collect a fee of 50 CFA (around ¥10) per use from the residents. This money is split four ways, with some of it going to maintain the machine and buy new one when the current one were broken, some going to fund other projects being carried out by the association, some going to the committee's expenses and the remainder being paid to the committee members.

In order to ensure the funds were managed correctly, a simplified course in bookkeeping was given to the management committee members. Their sense of responsibility was evident in the way they listened intently during the lectures, those who could read and write took notes, and all of the trainees reviewed what they had learned together. 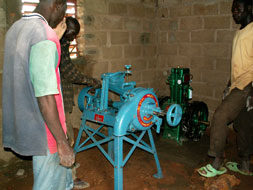 The grain mill set up in the Wamtenga village

This is the largest job I've ever been entrusted with. I am very happy that everyone has such confidence in me. I want to repay the faith that has been put in me by managing the mill sent by the people at HFW and making sure it is put to good use.