Intensive therapy for severely malnourished children is needed to protect their lives and well-being. 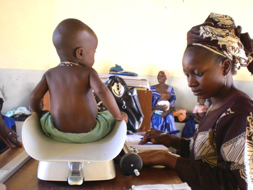 The “Nutrition rehabilitation and education for infants, lactating and pregnant mothers (CREN)” project at the health center is approaching its sixth year, and the number of the patients continues to grow. So far, 734 children have been diagnosed with and treated for malnutrition. Of those, 256 have since recovered from their condition (as of September 2010). None of recovered patients have since relapsed into malnutrition, and the positive results of medical treatment and nutritional guidance can be seen steadily.

There are, however, still large numbers of children being diagnosed with and treated for malnutrition. Severely malnourished children take an average of six months to fully recover, and in some cases can take up to a year. Despite receiving weekly medical examinations and treatment, poor nutritional balance and insanitary living conditions at home mean that children can relapse into their original condition even after they have begun to recover. When medical treatment is prolonged as a result, it becomes a huge burden on the strength and time of mothers, who leave their villages to commute on foot or by bicycle, and in many cases they stop coming for treatment even though the children have not been fully recovered yet.

In order to reduce the burden on such mothers, and to prevent delays in the children’s recovery, an “intensive short-term treatment” has been introduced to restore the body weight of severely malnourished children to a healthy range over a period of approximately two months. The frequency of medical examinations is increased from once a week to three times per week, and intravenous therapy is provided along with nutritious rice porridge. Over a two-month period from May to July 2010, this treatment was successful in rehabilitating twelve out of thirteen children treated from a severely malnourished status.

Yet, the medical center is not sufficiently equipped for children who require more complex examinations, however, or for those who fall victim to more serious cases of malnutrition. Arrangements have therefore been put in place to transport such children smoothly to major hospitals in the capital. The intensive short-term treatment and the transportation to major hospitals will be continued to protect the lives and well-being of children. 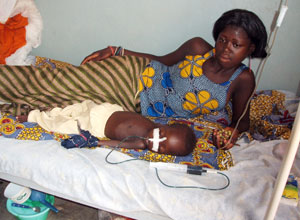 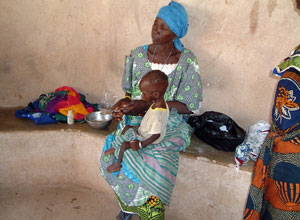 “My sixth child, Nana, was fine when she was born, but after a short while, the health center found that she was malnourished. But the center is ten kilometers away from our home, and we could not continue to get her treated. Nana’s condition deteriorated rapidly. Several more attempts to get to the health center as required failed, and she was eventually diagnosed with a severe case of malnutrition. I was very frightened about what might happen to her. Luckily, the center selected her for receiving the intensive short-term treatment. Since then, I decided to walk long distance to the center every time the treatment was given for the sake of my child, even though I was busy with my farm and the housework. My husband was understanding, and Nana was able to receive her intensive treatment three times a week until she fully recovered. My whole family and all the mothers in my village were astonished at the speed of her recovery.
CREN staff also told me how to get nutritious ingredients available around my neighborhood, and patiently explained how to cook nourishing porridge. Thanks to their help, I have learned to take care of nutrition management at home. I sincerely believe that my children will never fall victim to malnutrition again.”