The opening of a kindergarten school lunch program We better the nourishment of children. 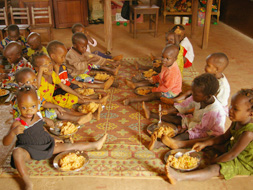 Until the cafeteria is completed in April, the children will spread mats and have lunch in the classroom

Operation of a kindergarten

In February of 2013, we began a school lunch program in the village of Beto. When classes are over in the morning, every weekday, except Wednesday, for four days, we provide lunches.

This kindergarten is the only infant educational facility in all of Beto, a village of around 8000 people. With the support of HFW, the kindergarten opened in October of 2006, and presently, 140 children from ages three to five, commute to its one school house and three classrooms. From 2008, a school nurse has conducted regular physical examinations, and has found that there are many children there who are suffering from anemia. Most of them are from families where they do not get enough to eat, or because the commute to the kindergarten takes an hour, they cannot return home for lunch. In response to this, we began a school lunch program to provide a menu of potatoes, which are the staple in that region, and beans to provide protein and iron.

Until the kitchen is constructed, while it is the dry season, food will be cooked outdoors 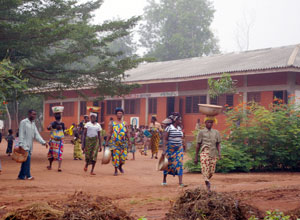 All the guardians and residents helped the construction