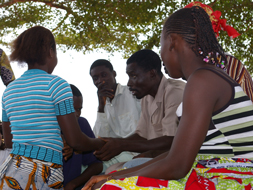 In Benin, women and children are in vulnerable position. Women are traditionally in a weak position with regard to inheritance of land and property, and children are often forced to marry when they are still young. In order to protect the rights of women and children, the "Family Law" was put into force in 2004, declaring equality between men and women with regard to inheritance and setting the age at which children are allowed to marry. However, the law does not mean anything if people are not aware of its existence and continue to live only according to their traditions and customs. HFW came to a realization that an awareness raising campaign of the "Family Law" was in order.

A strong mutual trust between local people and HFW is essential, since the HFW workers inevitably step into their customs and their value system to conduct this type of campaign. HFW waited until the trust relationship was sufficiently cultivated through its development work. The awareness campaign was started in July 2008. First, 22 graduates of the literacy class were put through training to become facilitators* of the campaign. The trainees began by reading the law written in their local language Fon, which they had just learned, and writing down anything that they think is important. They then learned a technique to facilitate the discussion in subsequent sessions. They also learned a technique to deliver difficult messages about their rights in an easy-to-understand manner through means of role-play or songs.

These trained facilitators, after returning to their areas of the village, will be able to take initiative to set up discussion forums once a month to provide the local residents with an opportunity to exchange ideas about the "Family Law". In this way, HFW can continue its campaign to deepen the people's understanding of their own rights.

* Facilitator: a person who chairs and facilitates effective discussion at meetings and workshops. 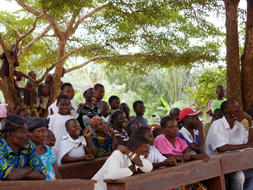 Community members including children came to watch the drama performance