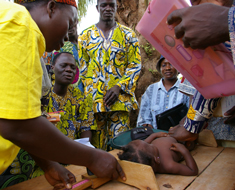 Local residents practicing how to measure children's height and comparing it with their age to examine their growth development levels.

At the Gbeto village, where HFW has its activities, it was discovered that one out of 7 children in the village has malnutrition according to the nutrition survey conducted in October 2007 by HFW Benin. In this region, enough crops can be harvested for food, when no bad weather conditions such as than usual rain falls. HFW found out that the cause of malnutrition is lack of information on appropriate eating habits among people, so growing children are unable to take in their required nutrients when necessary. Frequent diarrhea that occurs from the unhygienic conditions is another major cause. So HFW Benin decided to start a project to teach how to make a well balanced meal for children using local products, and spread information and knowledge on nutrients and hygiene management within the region.

In January 2010, nutrient training for the local residents was carried out. People who participated in the training are 20 local residents with commitment to make their village a better place, who participated in HFW's projects such as awareness raising on human rights. First, information was shared on what and how they feed children less than six months old and one year old respectively. Based on this knowledge, a dietician analyzed the nutrients of the children's daily diet, and prepared content for nutrient guidance program in the Gbeto village. In the future, HFW Benin will train people according to the program, and people who have completed the course will give cooking classes where they live and spread information and knowledge on nutrients among the local residents.

Currently HFW is constructing in the Gbeto village a health center for mothers and children with Grant Assistance for Japanese NGOs from the Ministry of Foreign Affairs of Japan. The nutritional improvement project for children was a component of the nutritional improvement program scheduled for 2010 at the health center for mothers and children in 2010, but made a head start in 2009. 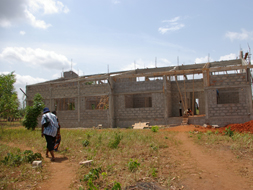 The maternity hospital under construction 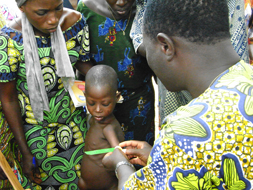 Training to measure the circumference of a child's upper arm. Trainees could recognize the malnutrition among the children more firmly.